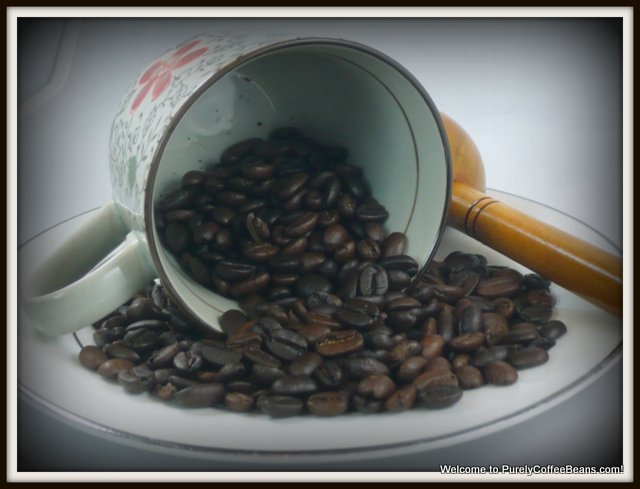 If, like PurelyCoffeeBeans knows, you are a dedicated coffee drinker, you’ll certainly know about Arabica coffee beans, they’re in almost every cup of coffee you drink!

Coffee Drinkers of the World place considerable importance on just this one humble variety of coffee beans, the Arabica coffee beans.

While there are other varieties of coffee available worldwide, most coffee drinkers prefer their coffee to be made from Arabica coffee beans. And for good reason: it’s lower in caffeine and more refined in taste than most Robusta coffee beans.

Disclaimer: As an Amazon Associate, I earn commission from any qualifying purchases.

These days, to satisfy palates in all parts of the world, Arabica coffee beans are grown in as diverse parts of the world as Indonesia, South America and the Carribbean. In fact, they now account for over three quarters of the coffee drunk throughout the world.

What will I learn about Arabica coffee beans?

What is the best coffee in the world?

Though Arabica coffee beans come from very humble origins, its development into one of the premium coffees would surprise those shepherds long long ago. It has come a long way since its discovery and early cultivation in Yemen to the palates of Coffee Lovers like you and me!

However, Yemenis seem to prefer to make their coffee in the Turkish or Greek style. One interesting twist Yemenis make and one I’ve got to try: adding some cardamom or ground ginger (which is very popular).

Where do Arabica coffee beans come from? From Yemen to the World!

Arabica coffee beans are believed to be the first coffee ever grown. It seems that they have been cultivated in parts of the Arabian peninsula for hundreds, even thousands of years. In fact, the plant still grows wild in Ethiopia.

But it is best grown in the higher elevations and mountains of the tropical regions which is why some of the coffee names already familiar to you include the rockier parts of the world: Blue Mountain, Java, …

Are Arabica beans the best? Coffea Arabica, take a bow!

Let me introduce Coffea arabica. The Coffea arabica is a humble plant in many ways. In the wild, you may see the coffee plants grow to between ten and fifteen feet tall (3 ~ 5 meters). The plant is covered in large leaves. You will also notice the pretty flowers that seem to just spill out like cream from these plants. These lush flowers will produce the coffee beans that eventually end up in our coffee cups.

So Coffee Arabica plants prefer the growing conditions of places like Indonesia because its soil is enriched by volcanic activity, and Africa because the mountains offer a higher altitude away from the heat and direct sun of the plains. In fact, they prefer shaded environments provided by mountains slopes, taller trees and bigger plants so that they can mature slowly.

The plant itself is vulnerable to a number of environmental problems: including disease, pests, and (at higher altitudes) frosts. All of these make harvesting more tricky and more prone to variations in quantity, quality and availability. This, of course, contributes to the higher prices paid for Arabica beans.

Is coffee a fruit? Well… It grows from flowers which produce cherries

The coffee plants need about from two to four years to grow after they are planted before they produce their scented white flowers. But coffee farmers need to be wary in case the flowers open on a sunny day. The plants may produce too many coffee cherries, and that isn’t what farmers would like to see. Why? 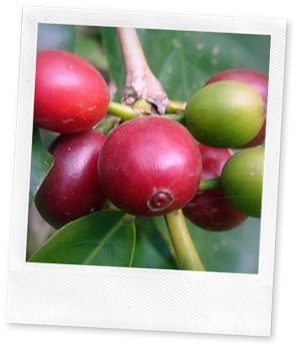 If Arabica coffee plants overproduce in one season, then in subsequent seasons, even if planting conditions aren’t so good, the coffee plant will try to repeat that feat to the point that the health of the plant itself may be harmed.

So coffee farmers carefully prune the Arabica coffee plants to restrict the number of cherries it produces and keep the plant vibrant and sustainable.

Once the cherries start to ripen, you will see how the color varies from purple to even red. Maturation needs nearly 7 years even in the humid tropical warmth. Depending on where the beans are grown, harvesting may take place once a year (in Brazil) or continuously (in Java).

One surprising fact: have you ever wondered why coffee plantations are so huge? That’s because an Arabica tree can sometimes only produce as little as one (yes, one!) pound of coffee per year.

How is Arabica coffee harvested and processed?

The coffee cherries are carefully selected and picked from the shrubs.. They are then graded and dried, usually under the sun (where practical). 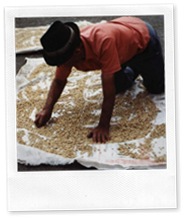 When you first pick freshly picked Arabica coffee beans, you probably couldn’t even tell that it is a coffee bean! It’s still encased in the hardened shell and protected by the husk. To start the process, the husk is removed then the coffee beans begin their processing. This will remove the outer layers of fruit pulp and protective inner skins (called the silver skin & the parchment).

Once you see the bean, you would be surprised by its shape and color, and also by appearance of two beans inside the fruit. The Peaberry is a type of coffee where you will find only one bean, and so many coffee drinkers value this type of coffee. Typically, they look a pale greenish in color, and not at all appetizing.

After hulling, they are dried out in a number of ways before being graded, sorted, packed and shipped to the coffee roasting companies. There the coffee beans are roasted and resorted into different products before packaging and distribution. 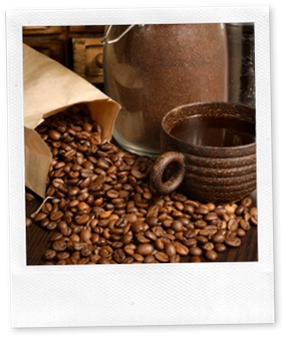 Are all coffee beans Arabica? No, they’re not!

So many people love Arabica Coffee Beans, but it’s easy to be fooled! For a long time, we’ve been drinking stuff that looks like coffee: it’s black, hot and caffeinated. But when you buy coffee in the restaurant, or coffee shop or grocery store, you may be surprised to know that it is probably not made solely from Arabica coffee beans. Robusta beans are usually added though they have higher levels of caffeine and taste more unpleasant, even harsh.

Even the better coffee brands are often diluted with last season’s Arabica coffee beans to lighten the taste and make the coffee more appealing. Don’t be surprised then when you have tried Arabica coffee that you find yourself having to turn down the coffee available in the local convenience store, grocery store, or gas station!

You’re not a coffee snob! Because once you have tasted fresh Arabica coffee, your taste buds become keenly aware of the difference. It’s really hard to go back to instant coffee then!

At PurelyCoffeeBeans, I’ve answered lots of questions over the years. You’ll find the questions and their answers scattered throughout the site! I’m always open to more questions, if you’re frustrated or curious, or you want to review a coffee, why don’t you drop me a line!

This week we welcome…!

How many pounds of Arabica coffee beans are harvested each year?
by Tiffany (Los Angeles)

I know that peaberries account for approximately 5% of the total harvest, however, how much is the total harvest? To find out an exact number I would like to know how many arabica beans are harvested per year OR how many beans are harvested in a single origin coffee plantation a year? Also, if an exact number (not a percentage) has already been found for peaberry production, that will do too!

I think you might be able to figure out how many beans per ton… but arabica beans vary in size/weight. I don’t think anyone counts coffee by the number of beans! Usually by weight.

Wikipedia cites 10.2 million metric tons of coffee production for 2018. So you can get a start on that number. The ICO (International Coffee Organisation) keeps a record here.

Personally, I have never drunk coffee because it was good for me! I wouldn’t encourage you to, either. However, there is a growing body of debate and evidence that drinking coffee has some health benefits: lower incidence of certain types of cancer, reduced oral cavities, prevention of some types of heart problems.

I do suspect that doctors and scientists will argue the pros and cons of drinking quality coffee for years to come, so I wouldn’t want to preclude their health conclusions. In short, I cannot recommend coffee as a health food.

But if you like coffee, you may be pleased to know that there are some attendant benefits. It should also be noted that these benefits only seemed to be present in those drinking more than a couple of cups of coffee a day (that’s me! – he said excitedly).

What are the different types of coffee beans, find out here!

PurelyCoffeeBeans.com is a participant in the Amazon Services LLC Associates Program, an affiliate advertising program designed to provide a means for sites to earn advertising fees by advertising and linking to Amazon.com. As an Amazon Associate, I earn from qualifying purchases.

Thank you for visiting!

I’d like to sincerely thank you all for your support!